Lately my PC (Windows 8.1) randomly ran into a problem and needed to restart. After the restart I get the message:

No Bootable Device
Strike the F1 key to retry boot, F2 to run the setup utility

F1 doesn’t help, but turning the PC off and on again does help and the PC starts again. I get this problem ones in a while.

One of the possible solutions to this problem is to search for corrupt files with SFC:

After the restart I still had some corrupt files. You can filter the log (C:\Windows\Logs\CBS\cbs.log) with this CMD command:

Because these files where not altered after the Windows install, it turned out I had to repair my Windows image file where the sfc scan is checked upon, this can be done with the CMD command:

After the image repair the system scan (sfc /scannow) had a verification 100% complete with no corrupt files.

MySQL For Excel is very useful to quickly update or insert Excel sheets to the MySQL database.  You can install the application with the MySQL Installer. I’m using MySQL For Excel 1.3.2 in Excel 2010.

To insert Excel tables to MySQL:

After upgrading to Windows 10 all my programs couldn’t access the internet including Firefox. The solution is to do a Windows Sockets reset.

After the restart all the programs have internet access again. Also make sure they can connect through the Windows Firewall, some of the settings were changed after the Windows 10 upgrade.

The last couple of weeks my computer (running Windows 8.1) was working so hard steam came out of the exhaust. In the Task Manager I found WMI Provider Host was using about 25% of the CPU on my system.

On StackExchange the same question is answered. To find which services depend on WMI Provider Host: open Computer Management > Services > Windows Management Instrumentation and go to tab Dependencies.

I’ve performed a Windows Clean Boot to find the service which was causing this. The spike takes place a couple of minutes after a reboot. In the end it turned out the Dell Data Vault / Dell Data Vault Wizard was the cause of this.

Afterwards I found Dell was aware of problems with these services, but running the Dell PC Checkup didn’t give any results…

Update (2015-07-30):
I just did a reinstall of Dell SupportAssist and this uninstalled the Dell Data Vault / Wizard programs. I couldn’t figure out what these programs are doing anyway. Dell Support said they collect data from .dll files, but not why this done.

After reinstalling different versions of the software and the drivers the solution turned out to be a lot simpler: You just have to connect your My Passport with a USB 2.0 port instead of the USB 3.0 one.

The WD SmartWare 1.6.2 works fine, with the newer versions you get Dropbox but the backups seem to hang more often.

Update (2015-04-14):
WD Backup Engine was using a lot of CPU the whole day, even when the external HD was disconnected. The new version WD Smartware 2.4.10 has the option to schedule the backups to once a week or once a day, so the software doesn’t have to monitor your files the whole day. For hourly backups Windows File History is the easier option.

To make sure Perl is active you can go to IIS and click on the Handler Mappings feature. There you should find the Perl CGI for .pl handler with these settings:

Some users get this error message while running the ap-iis-config.bat file:
Use of uninitialized value $path in -f at ap-iis-config line 358.
The installation still seems to work though.

The ASP.NET MembershipProvider is also available for the MySQL database.

The Membership Provider doesn’t come with much fields for profile information, like firstname and surname. A shortcut to implement the name would be to use the “Comment” field instead. If you don’t use the comments off course.

An other way to expand the profile of a user is to use the MySQLProfileProvider. You just add the extra columns in the web config.

This solution doesn’t work with an Empty Web Application, only with website projects in Visual Studio.

An example to extend the user profile with an Empty Web Application can be found on Jon Galloway’s blog and here.

Windows 8.1 seems to hang after running chkdsk. The steps I followed: 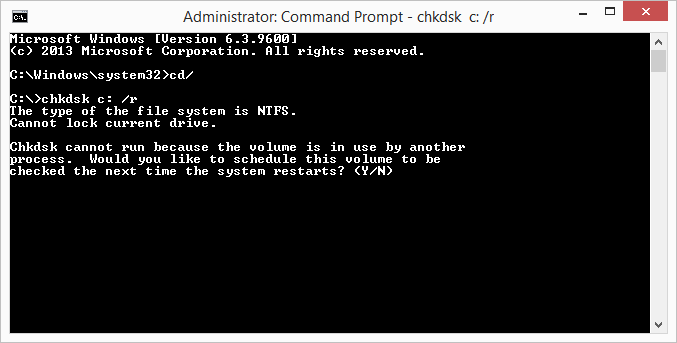 After the restart Windows hangs with this message:

After waiting for 2 hour suddenly it reboots again and gives the message 100% complete and starts normally. See also this forum for more information.

BBC updated the iPlayer a couple of weeks ago and since than it stopped working. I get a black screen or a white screen, but no streaming.

It turns out that HTTPS Everywhere is responsible for this. The solution is to disable it for the BBC website and try to stream it without the secure connection.

Also make sure that the latest MVPS hosts file is not blocking some bbc.co.uk pages. This is turned on by default.

Apparently Asus ships it’s laptops with different SSD’s and if you are unlucky you end up with a SanDisk. I went to Best Buy with it, but they will not replace it, because it’s still working  but only very slow.

So how bad is it? I try to figure that one out, but it’s difficult to measure. Sometimes I get good results, sometimes bad. The only tools I have found for this is CrystalDiskInfo and CrystalDiskMark.

Here is the CrystalDiskInfo:

And this is the CrystalDiskMark run:

Especially the writing can be very slow. Copying a lot of files can slow things down compared to one big file.

I’ve also used the SanDisk SSD Toolkit, but that gives the same info as the CrystalDiskInfo. I’ve read that you can reset the SSD, but then you loose all your data on the drive. Since I don’t have a copy of Windows, that’s not an option. The only options I have is to wait till the SSD dies or replace the SSD.

For comparison I’ve added a normal hard drive (Hitachi HDS721050CLA362) which is a year older and has been running for 24417 hours (almost 3 years non stop).

The writing is a lot faster on this one.

Update (2014-10-10):
This summer I finally decided to upgrade the SSD. First I bought a SSD (Samsung Electronics 840 EVO-Series), but that didn’t fit in my laptop.  I found out you need a special mSATA connection for my Asus laptop, which isn’t universal.

I than asked Asus if the slow SSD falls under warranty. They said it would, but they didn’t give me any guaranties on replacing the SSD until they see it themselves. So you need to send the laptop to them for $50 and hope they replace it. I didn’t send the laptop, because they would probably say it still works.

So in the end I still have the same SSD. In the process I formatted and reinstalled Windows 7 professional and it looks the performance of the disk improved with it:

Update (2015-08-20):
The slow SSD was an indication that the laptop was slowly falling apart, first the keyboard stopped working and than worse: the screen turned blank. In then end I had to buy a new laptop with a lot better Samsung SSD: